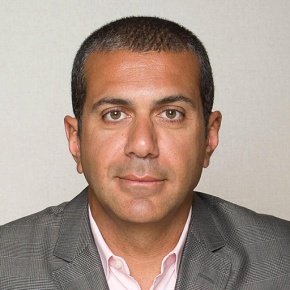 Bassim Haidar started his business at age of 20, determined to restore the fortune, which his family lost. A Lebanese national, he was born in Nigeria and lived there for the first ten years of his life. At age 10, Haidar and his family moved to Lebanon, where he attended school and studied at Beirut University College. He then returned to Nigeria in 1991, where he co-founded his first company: Intercomm Ltd.; specializing in telecom equipment and radio links. Haidar grew Intercomm whilst co-founding GMT in 1995. GMT is now the leading integrated procurement, finance & logistics provider in West Africa. In 1997, Haidar sold his shares in Intercomm to his partner to maintain his focus on GMT which was growing at an extremely fast pace.

In 2003, Bassim founded Channel IT to cater and provide supplies and services to the Telecomm industry in Nigeria. At the time the industry there faced many challenges in sourcing, logistics, revenue generation and retention of customers, which Channel IT has helped the industry overcome. Today the company operates in 19 countries and plays a major role in technologies, infrastructure and services for the emerging markets in Africa and the Middle East, shaping the way people live, socialize, work and learn.

In 2011, Channel IT expanded and invested heavily in technologies to provide value added services for the mobile industry with great success. The rapidly expanding portfolio of mobile VAS products prompted the creation of Channel VAS; a company destined to become a leading vendor of Mobile VAS, Mobile Financial Services and Fintech Services for emerging markets across the globe.

In 2013, Channel IT Group witnessed two additions: Channel Technologies, a research and development arm that develops platforms and applications for industries that the Group operates in, and Channel Power, a company that provides electrical infrastructure products and engineering services for generating, transmission and distribution companies in Nigeria.

In 2017, Waha Capital, a leading investment company based in Abu Dhabi acquired a minority stake in the leading data analytics and fintech firm Channel VAS. The acquisition builds on a strategic and integrated partnership, promoting the expansion of the rapidly growing Channel VAS’ global footprint at a very exciting time for the constantly growing fintech industry.

Today Haidar has over 20 years’ experience in various sectors of the African technology market. He has spearheaded ventures in various aspects of the technology and telecommunications industry ranging from hardware and software through to support areas. He also provides oversight leadership to the various business units at Channel IT.

Over the last decade, the Group’s business portfolio’s extensive growth in telecommunications, IT, mobile communications and infrastructure sectors, has seen Channel IT become one of the leading global vendors for communications in Africa, Asia and the Middle East. With over 1,400 employees and a turnover of USD1.6 Billion per year, Haidar has become one of the most successful pioneers in his industry.